Giffords Law Center to Prevent Gun Violence released the latest edition of its Annual Gun Law Scorecard, which grades and ranks each state on the strength of its gun laws. This comprehensive, 50-state analysis clearly shows fewer people die from gun violence in states with strong gun laws. In response to rising rates of gun violence in America, public demands for action intensified last year and as a result, many states passed gun safety measures, which improved their scores—some for the first time since Giffords Law Center began conducting this analysis in 2010.

“America’s devastating gun violence epidemic is growing and impacting every part of our country because too many lawmakers would rather wish it away than acknowledge their role in advancing solutions to make our communities safer,” said Robyn Thomas, executive director of Giffords Law Center to Prevent Gun Violence. “This public safety threat needs to be addressed with facts, evidence, and action. We’ve proven that lawmakers can save lives, reduce violence, and make their states safer by following a simple blueprint: pass gun violence prevention laws. Every year, our scorecard is a reminder to states that progress is possible, but also a reminder of the work we have left to accomplish. The Gun Law Scorecard should be both a resource and roadmap for elected leaders, activists, and concerned citizens to take action.” 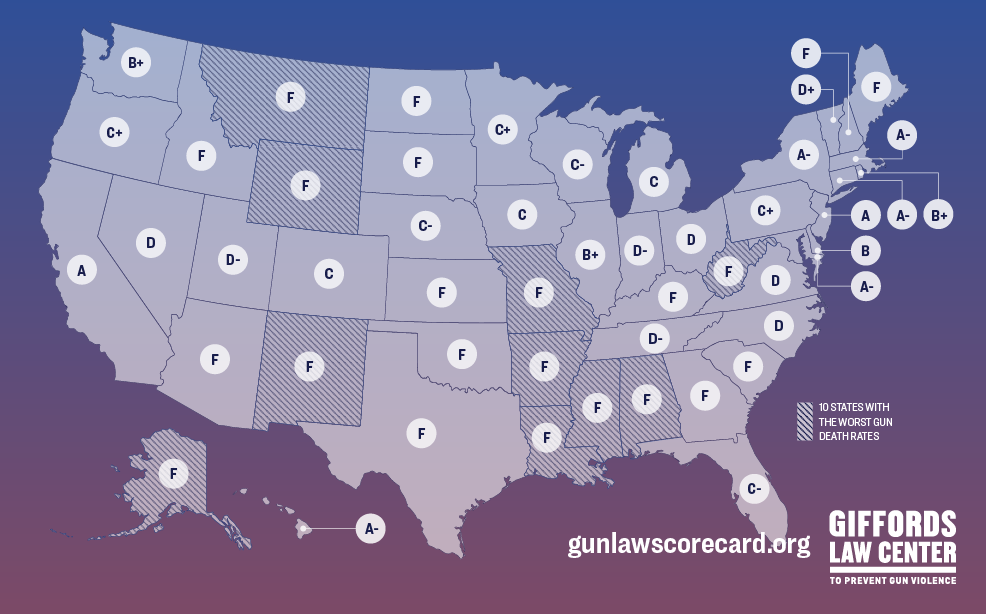 The Annual Gun Law Scorecard clearly demonstrates that there is a significant opportunity to address the nation’s gun violence epidemic if more states act. In 2017 the number of people who died from gun violence rose for the third year in a row, reaching 39,773 deaths. In fact, 2017 is the first year in American history that gun deaths outpaced car crashes by more than 1,000 deaths. 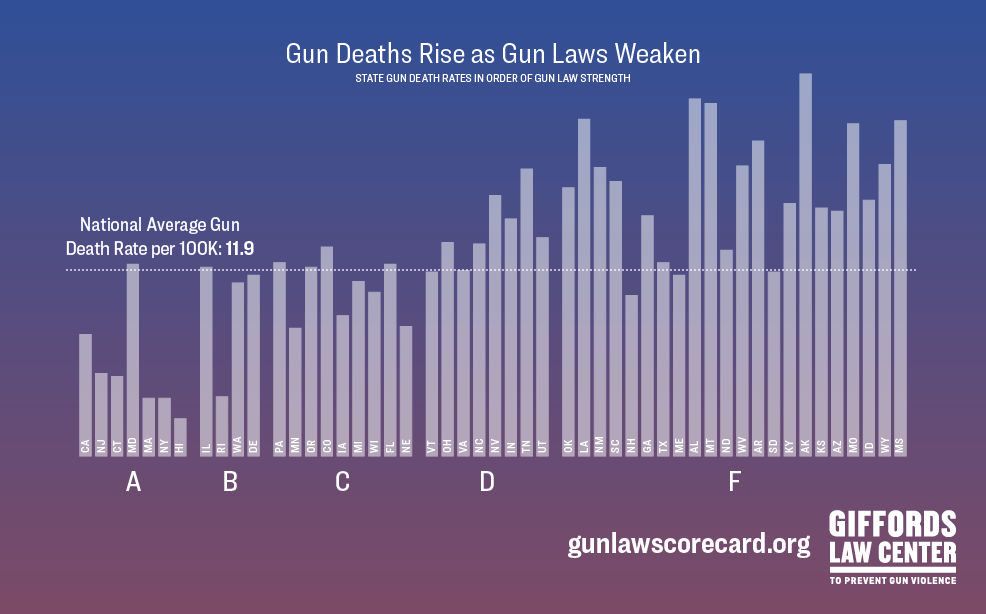 Of the 10 states with the lowest gun death rates, seven have some of the strongest gun laws in the country, receiving a B+ or better on this year’s Gun Law Scorecard. All seven states have passed private-sale background checks on some or all gun sales.

Of the 10 states with the highest gun death rates, all received F grades on this year’s Scorecard. Despite powerful data demonstrating the correlation between gun law strength and gun death rates, several states have ignored public cries for action and done little or nothing to strengthen their gun laws in recent years.

After the massacre at Parkland’s Marjory Stoneman Douglas High School in February 2018, Florida enacted a package of bills to create an extreme risk protection law, a higher minimum age for buying firearms, and stronger waiting periods. These changes resulted in a dramatic grade increase, raising Florida’s grade from an F to a C-—the biggest improvement in any state on this year’s Gun Law Scorecard.

Vermont was the second-most improved state in 2018 and passed gun safety laws for the first time in its history, raising its grade from an F to a D+. Vermont’s comprehensive package of new gun safety laws includes universal background checks, extreme risk protection orders, a higher minimum age to purchase firearms, a ban on large-capacity ammunition magazines, and a new policy to allow law enforcement to remove firearms in certain domestic violence incidents. Previously, the state had virtually no gun safety laws but this legislation had support on both sides of the aisle and was signed into law by a Republican governor.

While last year we saw 67 gun safety bills signed into law in 26 states and DC, the changes in eight states were significant enough to raise these states’ grades:

This year’s Gun Law Scorecard also highlights how successful efforts by gun violence prevention advocates to thwart gun lobby–backed bills allowed many states to keep their high grades. This year is the first time since 2012 that no state lost points for either of the two biggest gun lobby priorities—guns on campus and permitless carry.  No states saw their score downgraded by an entire letter grade. This is further proof that the gun lobby is losing its influence over state houses across America as voters and advocates stand up to gun lobby-backed legislation intended to weaken gun laws. In 2018, advocates were successful in helping defeat dozens of dangerous gun lobby-backed bills in more than half of the states, including stopping permitless carry bills and halting the attempted enactment of measures to allow guns on college campuses, universities, and K–12 schools.

View “State of Gun Violence” factsheets for all 50 states.

Join Our Fight Against Gun Violence